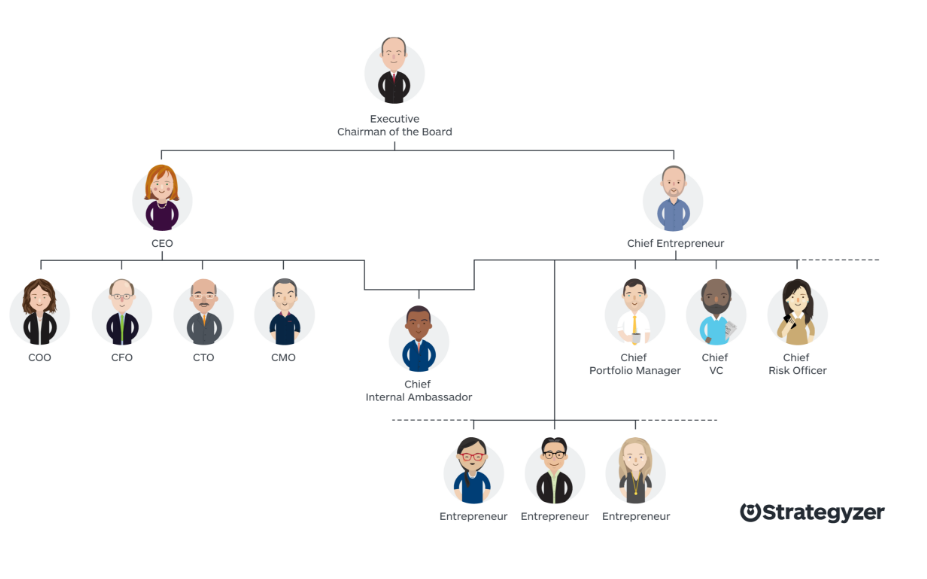 Every large company must face the reality of continuous innovation and disruption, or risk becoming obsolete in the 21st century. The organizational structures that characterize established companies today are unlikely to produce that new growth.

This doesn’t discredit the success corporations have generated from finding a successful business model and improving it over time. They are where they are because they successfully scaled and continuously improved a proven business model. However, to achieve substantial and continued growth in the 21st century, companies will have to look beyond improving the existing business model or simply launching new products. These actions just won’t generate enough growth anymore.

Growth will come from more ambidextrous organizations that excel at improving their established business model (exploitation) and excel at inventing tomorrow’s growth engines at the same time (exploration). Growth will come from entirely new value propositions and business models. Excelling at exploitation and exploration simultaneously is extremely difficult due to the very different cultures, skills, tools and mindsets required. However, only the businesses that succeed at nurturing these two cultures under the same roof will thrive in the 21st century.

It’s a radical shift but an important one. A 2016 KPMG study highlighted how 74% of CEOs are concerned about new entrants disrupting their business models. In the same study, 53% of CEOs believed they aren’t disrupting their own business models enough. In another McKinsey study, 80% of CEOs believed their business models are at risk; and only 6% of executives were happy with their company’s innovation performance. The organizational structures in many of these companies just aren’t set up to create breakthrough growth.

SO WHAT DO WE NEED TO DO TO SUCCESSFULLY POSITION ORGANIZATIONS FOR INNOVATION?

Firstly, companies need to move beyond traditional R&D, technology and product innovation to focus on new value propositions and business models. It also means creating an entirely new organizational structure in which exploitation and exploration can co-exist and growth can thrive. Exploration efforts must be led by what I call the Chief Entrepreneur. He or she will have equal power to the CEO to focus exclusively on inventing the company’s future. This Chief Entrepreneur manages a team of entrepreneurs, a portfolio of innovation experiments, and is the guardian of the company’s innovation culture.

When we talk about “innovation” we often think R&D, new technology, and new products. However, It’s increasingly difficult for organizations to grow substantially through product and technology innovation (classic R&D) alone. Kodak is a frequently cited example of an innovative company that still went bankrupt. Despite inventing the core technology used in digital cameras today, Kodak’s technology innovation wasn’t enough for the company to figure out a business model that could be a central piece to their future growth strategy.

Organizations are eager to create new growth, but have yet to make the distinction between incremental and efficiency innovation that sustains the current business, and transformative innovation that explores new horizons and potentially disruptive business models. For example: a new product model or feature might add some short-term revenue to a stagnating sector. Cost-cutting activities and business process re-engineering may steady the ship or make the company efficient, but focusing on these types of innovation alone will not be sufficient to your company’s survival.

Transformative growth comes from great value propositions and business models. New technology may still play a part; but new tech has to packaged in a great value proposition and coupled with a powerful business model. Nestle achieve this with its Nespresso brand when it reinvented how coffee was sold to households. However, technology doesn’t always have to be brand new. Nintendo’s Wii succeeded despite inferior technology because of an exciting value proposition to an underserved segment coupled with a profit spitting business model. Nintendo managed to sell over 100 million hardware units and over 900 million software units over six years until seeing a decline in sales. Even Nintendo forgot to reinvent itself despite this success.

Amazon’s ability to continually experiment and expand beyond its core eCommerce model make it another stellar example. In fact, last year, the eCommerce retailer surpassed all of its traditional retail rivals combined. Why? Because Amazon isn’t just an eCommerce retailer. The company regularly expands into completely new areas of growth like logistics, voice, AI, and cloud computing. In fact the cloud computing arm, Amazon Web Services (AWS), is Amazon’s fasted and most lucrative growth engine. The service has become Amazon’s most profitable arm. At $3.1 billion, AWS represents three quarters of Amazon’s total operating income for 2016. AWS is projected to generate $12 billion in revenue for the organization alone.

WHY YOU NEED A CHIEF ENTREPRENEUR WITH POWER

The best CEOs are excellent at growing and running a company within a known business model. What they don’t do well enough is reinvent and innovate. It’s not because they’re incompetent, they just fall short at the task for a variety of reasons. CEOs often become successful through the established business model, and are pressured to deliver short term results for that business. Not all CEOs have the ability like a Jeff Bezos to be the main engine for innovation. CEOs also lack the understanding of what’s required for growth innovation, and this results in the established business viewing anything that’s different as harmful antibodies toward the existing business model. There are also very few CEOs who can manage the task of two completely different roles that require entirely different skillsets and organizational structures. You would have to be schizophrenic to manage and succeed at managing your current business, while also inventing the future of your company.

SO IF THE CEO ISN’T SOMEONE WHO CAN INNOVATE, THEN WHO SHOULD?

I believe a new role, which I call the Chief Entrepreneur (CE), is needed for 21st century companies to remain relevant. The CE’s core function is to invent the future of the company, while the CEO runs the existing business (and finances the CE’s search for the future). This is not a Chief Technology Officer (CTO) role, nor is it the head of R&D, or merely a Chief Innovation Officer (CIO) role that reports to the CEO. The Chief Entrepreneur is an executive as powerful as the CEO, with clear leadership and protection over transformative innovation within the company. Together with the CEO they report to the Chairman of the board as equals. One focused on exploitation, the other focused on exploration.

BUT WHAT DOES THE CE REALLY DO?

The Chief Entrepreneur will be responsible for managing a portfolio of entrepreneurs who experiment with new business models and value propositions. This is someone with a passion for taking calculated risks to achieve the following:

I know what you’re thinking: is the CE role even realistic? What CEO would be willing to share power at the top levels of any company? I admit that it is a truly difficult task, but it’s not impossible. It’s important that the board of directors and the CEO realize the need to have someone on the same level to invent the future. The real question: can it be realistic to have only one person to own this role.

Now let’s talk about the team that the CE needs to build. These key roles are responsible for managing the exploration of completely new business models and value propositions. They will get their hands dirty and deal with the nitty-gritty of day-to-day testing and learning.

I want to be clear: this new org structure isn’t about creating more managers. The innovation space under the Chief Entrepreneur is so different that you need a different set of people to operate it.

It’s no surprise that companies run by entrepreneurs are often able to reinvent themselves. That’s why it’s so important for the Chief Entrepreneur to be a guardian of innovation culture. Although the “ambidextrous organization” is a difficult thing to achieve, there are a few key examples that we can turn to for reference. Amazon is one of them.

If you get the chance, I highly suggest you read Jeff Bezos’ annual letter to his shareholders. It’s a fascinating example of how intentional organizational design and a business model portfolio can result in great value and growth.

Bezos is very clear and intentional about the entrepreneurial culture and organizational design of his company. Even though Amazon employs over 240,000 people worldwide, the company works hard to avoid traps like slowness, risk-aversion, and failure to experiment that often plagues large companies. In fact when it comes to failure, Bezos had this to say to shareholders:

One area where I think we are especially distinctive is failure. I believe we are the best place in the world to fail (we have plenty of practice!), and failure and invention are inseparable twins. To invent you have to experiment, and if you know in advance that it’s going to work, it’s not an experiment. Most large organizations embrace the idea of invention, but are not willing to suffer the string of failed experiments necessary to get there.

The willingness to fail is one trait of an innovation culture. Others include customer obsession, the patience to think long-term; and most importantly, an eagerness to invent and pioneer. An execution culture isn’t a bad thing–it’s crucial to scaling and improving a known and validated business model, but it will not exhibit traits of an innovation culture. Execution cultures experiment far less; they work in full certainty rather than uncertainty; and they are focused on efficiency and implementation.

I often see large companies fall victim to disruption by smaller or newer players in the market because they’re too slow to act on opportunities, and incredibly focused on existing success. Your size shouldn’t slow you down, it should be an advantage for success. Large companies have the advantage of accessing budgets, existing assets and resources that can power the search for future opportunities. A startup has to scramble for such a head start, where a large company has the means to disrupt right under its nose.

So let me recap. Real, transformative growth cannot take place inside corporations today with the organizational structures of the past that focus mainly on excellence in execution and incremental growth. In other words the exploitation of a known business model. The structure of 21st century companies has to be ambidextrous. It requires a CEO who exploits and improves an established business model (or portfolio of business models); while the Chief Entrepreneur is anointed as a patron saint of growth innovation initiatives (or an innovation portfolio), and its required culture. 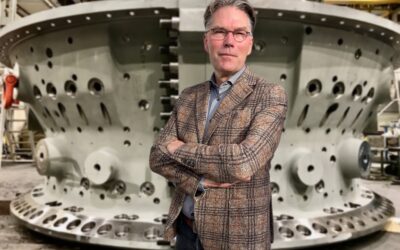 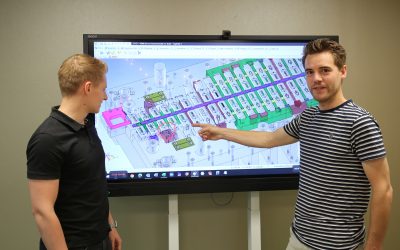 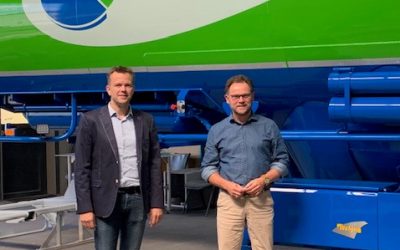 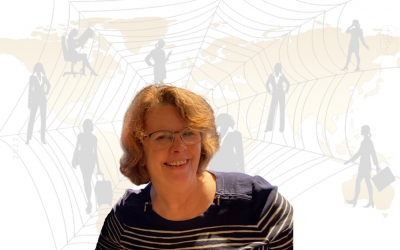 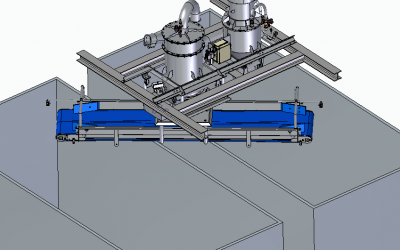